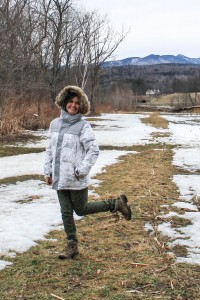 Courtney Amber Kilian has worked for the USDA (United States Department of Agriculture) following the Southern California fires, volunteered on organic family farms in Costa Rica, and earned her MFA in Writing from UCSD. During her MFA, she conducted research in Spain as a recipient of several writing grants. Her work has been described as “a love letter to a person and a place, as well as a testament to the ability of both humanity and nature to rise from the ashes.”

Courtney’s creative work appears or in MARY: A Journal of New Writing as their New Voice in Nonfiction, 1913 a journal of forms, Terrain.org as their fiction contest winner, Ghost Town, and California Prose Directory: New Writing from the Golden State.

Courtney blogs on writing and meditative practice on her blog, Om & Ink. She’s a student of gentle therapeutic yoga, and is currently working on her teaching certification with the School of Gentle Yoga. She loves yoga near trees, growing copious amounts of fresh produce, teatime, and floating in the Pacific. Follow her @CAmberKilian.